A trip report about diving the wreck of the Star of Scotland during a Santa Ana, with a little history, and some pictures. Enjoy!

Southern California is not a target rich environment for wreck diving like the Atlantic coast, but we do have a few interesting ones - close to shore and within sport diving depth. The reasons for fewer wrecks on the West Coast are many: infrequent bad weather, insignificant action during the World Wars, and a shorter maritime history. Some of the local wrecks, like the Yukon and Palawan were sunk as artificial reefs, others, like the Olympic, the Valiant, and the Star of Scotland went to their watery graves unintentionally. 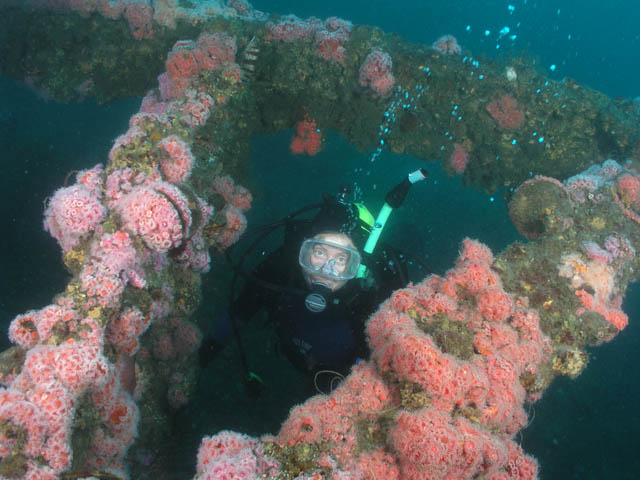 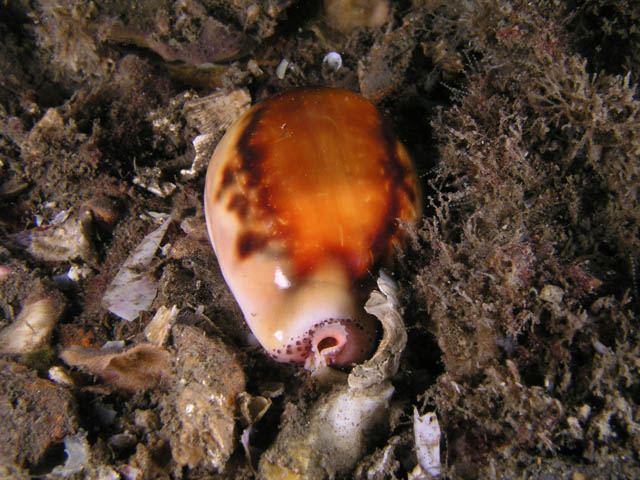 Our little dive group met early Saturday morning at Scott and Margaret's boat, the Popeye Maru. A high-pressure system over the Great Basin was pumping warm air over the mountains of Los Angeles and off-shore, a "Santa Ana" condition. While Santa Ana winds are bad for people living in the desert and canyons, when they blow, we enjoy beautiful weather along the beaches. The offshore breeze flattens the surface of the ocean and pushes the surface water out to sea, greatly increasing visibility. During a Santa Ana, Santa Monica Bay looks like a mirror - time to go diving! 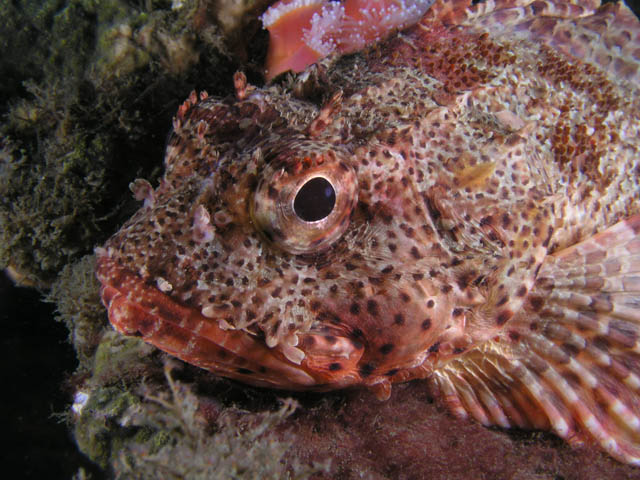 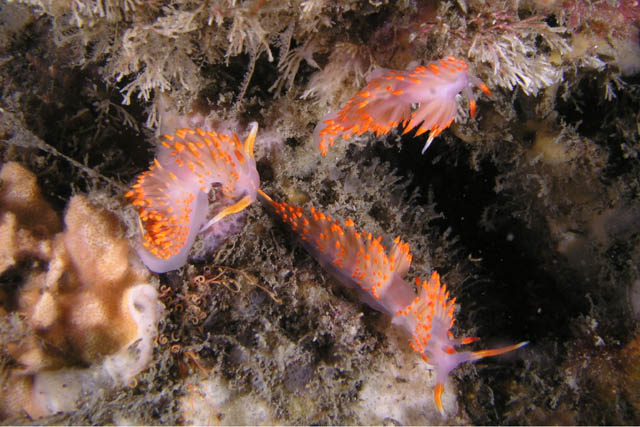 This weekend, conditions were ripe for a run up the coast to the wreck of the Star of Scotland, located a couple of miles off the Santa Monica Pier. As we approached the coordinates, we saw that another boat was already on the wreck and had dropped a buoy with a dive flag. It looked like all the divers were still on the other boat, so Scott slowly pulled into hailing range. We asked if they had any divers in the water and they responded in the negative. We then asked if it would be okay to drop anchor a short distance away, and they cordially agreed. 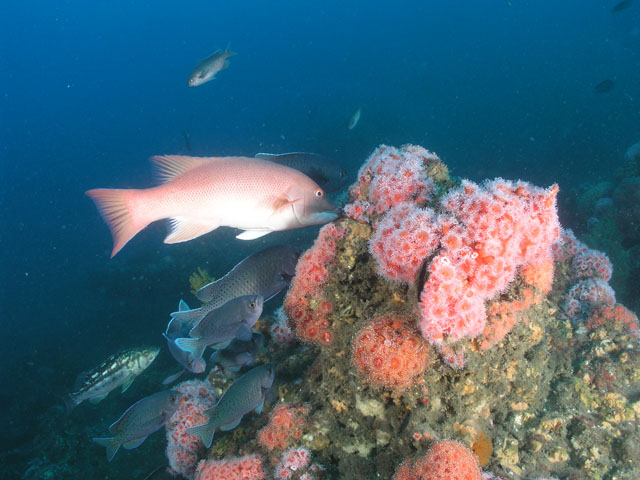 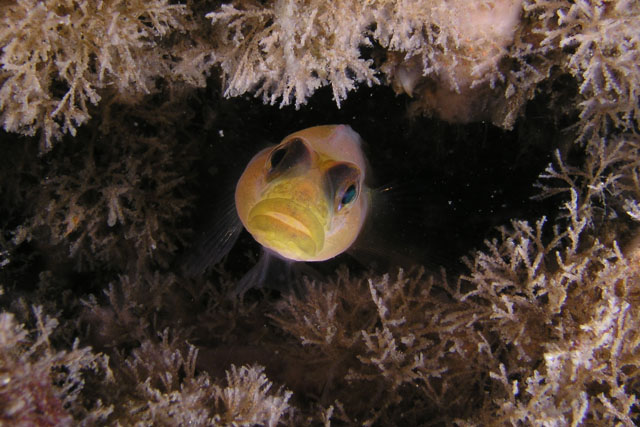 Someone on the other boat called out, "Is that jlyle?" What the ****? Who in world is over there and how do they know me? Then I remembered, last Thursday on the D2D bulleting board, in response to the weekly "Where's everyone diving this weekend" thread, I posted that we were going to try for the Star of Scotland if conditions were good. In fact, it was Patrick Smith on the other boat, who coauthored the book Shipwrecks of Southern California with Bonnie Cardone. We were in good company. It's a small world. 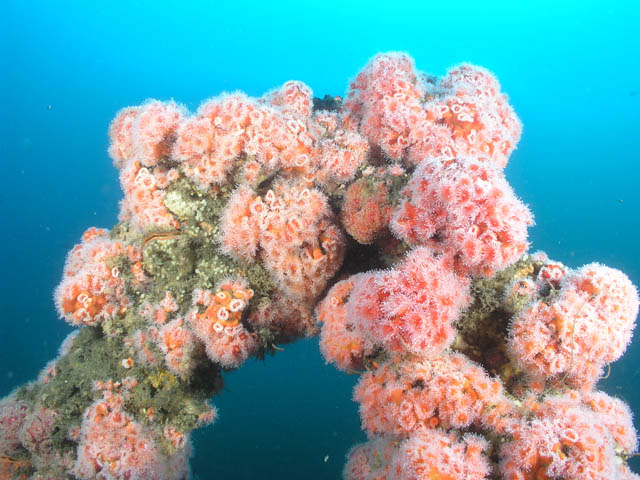 In 1918, the HMS Mistletoe entered service in the British navy as a Q-ship. Her purpose was to protect English shipping from German submarines by posing as a merchant sloop when in fact she was a heavily armed warship. If an enemy submarine approached to take a shot, the Mistletoe would run out the guns and engage them. She was 263 feet long, with a 35 foot beam, and displaced 1,250 tons. 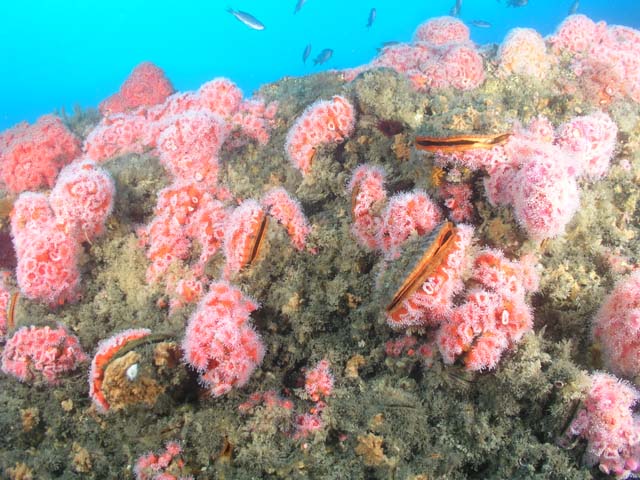 After WWI, in 1921 HMS Mistletoe was sold as a real cargo vessel, and renamed Chiapas. She continued to work as a merchant ship for several years, under several names, hauling cargo between Mexico and California. In the early 1930's she appeared in Santa Monica bay as the City of Panama. At that time, California law made gambling illegal, but federal law did not, and the state's jurisdiction ended three miles from the shoreline. One of many so-called gambling boats, she remained safely anchored outside of the three-mile limit, offering that irresistible triad: alcohol, gambling, and prostitution. Water taxis ferried customers to and from shore, and the gambling boats separated them from their money as quickly as possible.

Bollards on the bow: 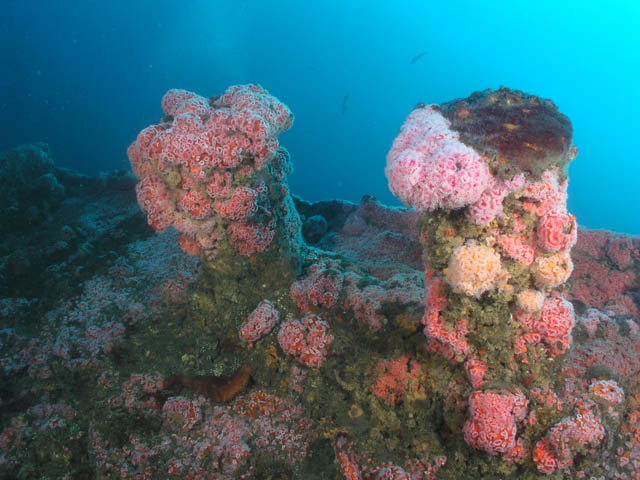 Bad publicity, due to a death on the ship, resulted in another name change; the City of Panama became the Star of Hollywood, and then the Texas. A pirate radio station operated on board, RXKR was licensed to operate at 500-1000 watts as an experimental, non-commercial station at 815 kHz. Instead, it pumped out 5000 watts of music and commercials and was heard as far away as Chicago. Under pressure from the U.S. government, Panama withdrew the ship's registry, the radio station was silenced and the boat was towed into L.A. harbor. 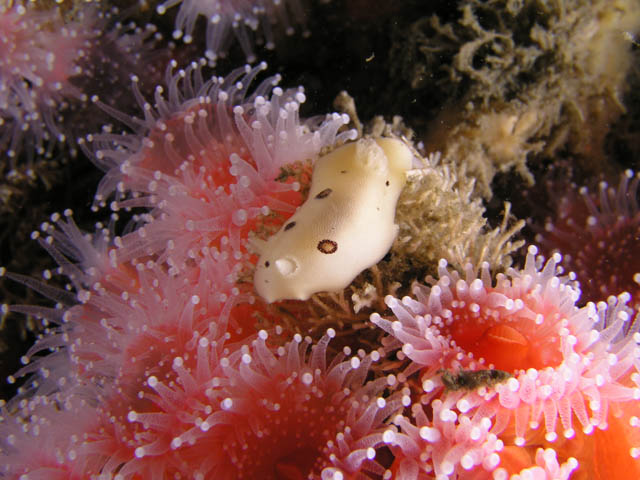 [One of the more infamous Southern California gambling boats was the Rex. The colorful owner and mobster, Tony Cornero Stralla marketed to the middle class with offers of free food and entertainment. It was estimated that he was netting over $300,000 a month, and this was during the Depression! Many attempts were made by law enforcement to shut down the gambling ships. Raids and arrests were made. Slot machines were dumped overboard. Legal arguments were heard, with the State claiming that Santa Monica bay was an "inland" body of water and thus the three-mile limit started from a line between Point Vincente and Point Dume. Cornero's lawyers argued that Santa Monica bay was rightly Santa Monica Bight, a large indentation in the coastline and the three-mile limit started at the beach. The battle raged in and out of the courts for years. Eventually in 1939, the ships were put out of business under "nuisance abatement" laws, with the Rex being the last to go. During later service as a barge in WWII, the Rex was captured and sunk by a German U-boat.] 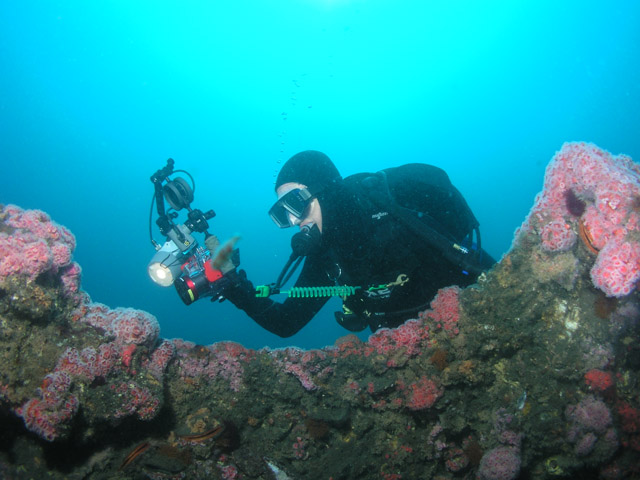 In 1940, our boat was reinstalled off of Santa Monica as a party/fishing barge under her final name, the Star of Scotland. A long fishing platform was installed along the side of the hull, and dining and dancing below decks were added attractions. You can see the platform in this picture taken:

Late one night in 1942, a lack of maintenance, and her age caught up the Star. During a winter storm, she started taking in more water than her pumps could handle and she started to sink. It was reported that the ship went down in under two-minutes. Despite valiant rescue efforts, one of the crew was killed in the accident. As a hazard to navigation, the bridge and masts were later dynamited and the Star rested on the bottom of the bay.

Is this one of the water pumps that failed to keep the sea out of the holds? 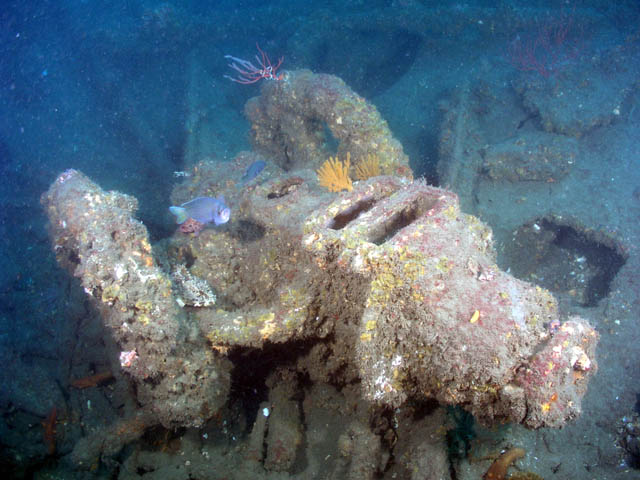 Today, much of the hull of the Star of Scotland has collapsed, but enough remains to make it an exciting wreck to dive. The port side is more intact than the starboard, with the brackets that held the fishing platform still in place. The bow of the ship is separated from the rest of the wreck by about 10 feet and lies tilted on its side. Amid ships are fallen plates, deck houses, and unrecognizable debris. Nearly everything is covered in corynactus anemones, carpeted in white, pink, lavender, and red. 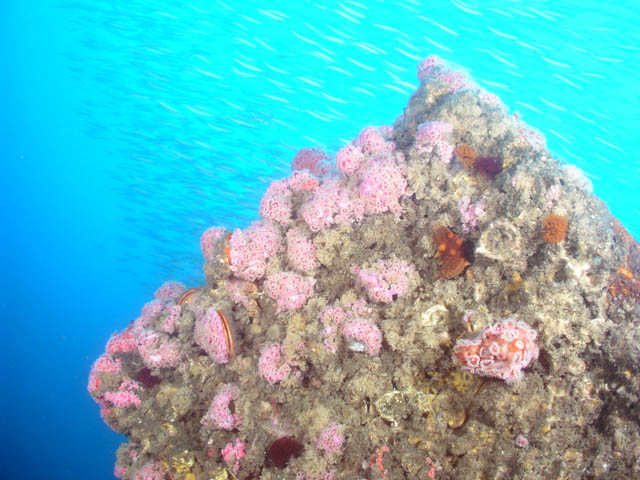 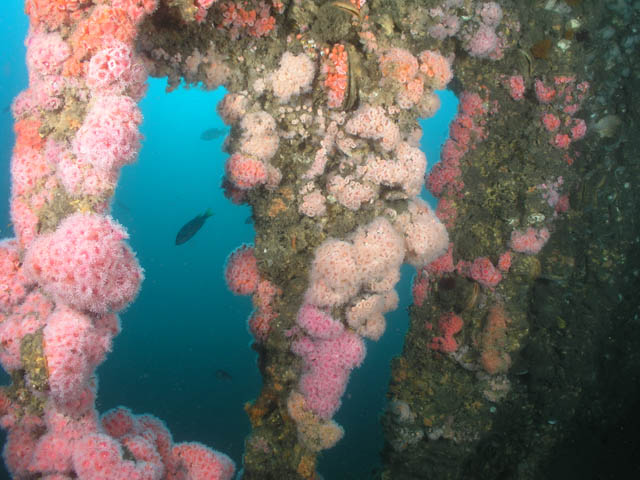 The Star lies in 80 feet of sea water and visibility is normally less than 10 feet. She is the only structure on a flat muddy bottom and attracts a lot of marine life. She is home to schools of bait fish which attract larger fish such as yellowtail, bonita, and mackerel. A popular fishing spot, divers have to be cautious as there is a lot of fishing line and tackle on the wreck. Some large lobsters are taken off the wreck late in the season. Black sea bass of 150 pounds or more are often seen here. 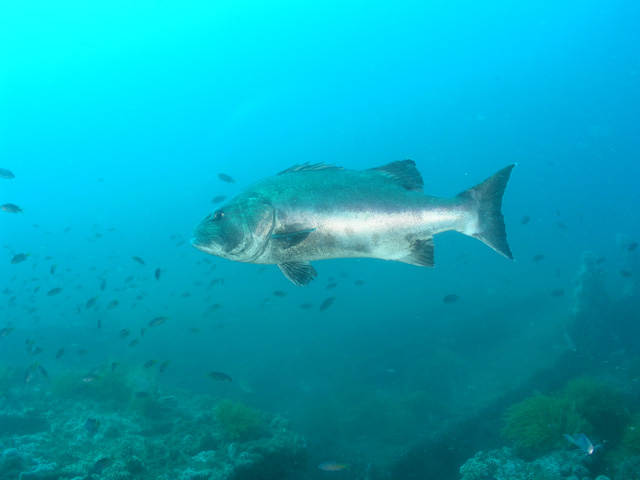 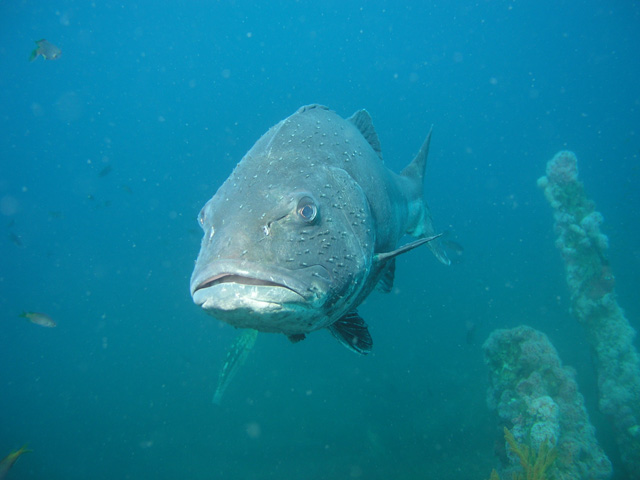 Windows in the collapsed deck house: 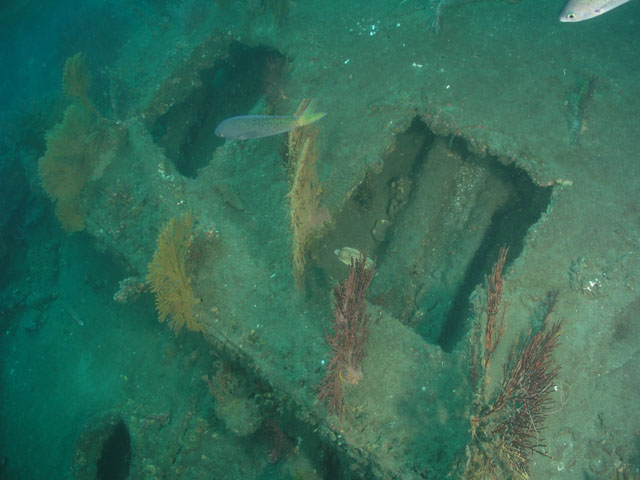 One of the more interesting attraction of the Star of Scotland to divers and underwater photographers is the number and size of the nudibranchs on the wreck. It is common to spot many Peltodoris nobilis over six-inches long. The number and size of Triopha catalinae is amazing; they're everywhere. Add to that the different species of nudibranchs to be found here, and you have nudi Nirvana. 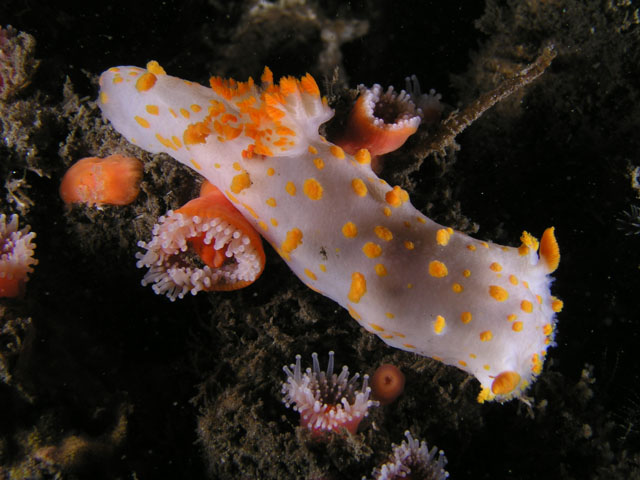 As soon as we dropped the hook on the wreck, we knew that we had lucked out. The diving gods were smiling on us. Descending the anchor line, we were rewarded with more than thirty feet of visibility and water temps in the low 60's. I found Patrick Smith inside the bow fiddling with his camera and took his picture. I spent the first dive taking advantage of the great visibility and taking wide angle shots of the wreck.

A picture of Patrick on the wreck: After swapping out our tanks and a one-hour surface interval, we returned to the bottom to find even better visibility than before. I circumnavigated the entire wreck, noting features that I had not seen before. Above the wreck were at least a dozen big black sea bass, hanging just out of camera range. A large school of sardines darted in unison towards the safety of the wreck. On the bow, I noticed puffs of white periodically clouding the water. Looking closer, I realize the scallops were spawning. Cool! Too soon, we ran out of bottom time and had to ascend the anchor line for the safety stop. What a fantastic day of diving. Can't wait for the next Santa Ana!

The end of our underwater diving experience. 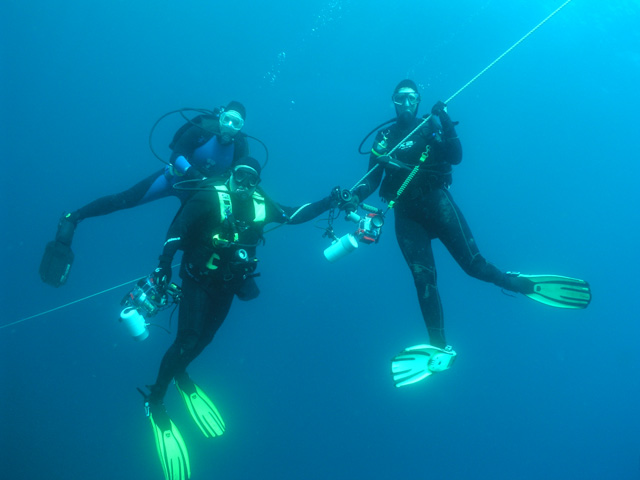 Commercial boats that occasionally take divers to the Star: