A World Heritage Site and home to schooling hammerhead sharks, Coco Island is on every serious scuba diver's wish list; while many may dream, far fewer will ever get there.

Coco is the world's largest uninhabited island. Ten square miles in area and 2,100 feet high, this volcanic island is located more than 300 miles south of Puntarenas, Costa Rica. A Costa Rican National Park, the island and surrounding waters are protected by 8 park rangers. The only way to visit Coco Island is by boat. The Okeanos Aggressor and the Undersea Hunter are two live-aboards offering 9/10 day excursions to the island. 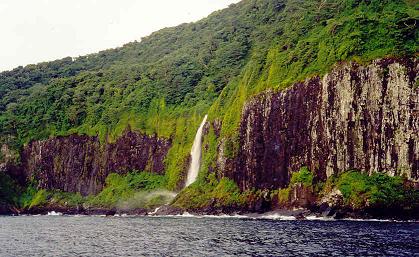 Two years ago I reserved all of the spots on the Okeanos Aggressor for a ten-day charter, January 7 - January 17, 2003. It didn't take long to fill all of the spots. Of course traveling as a group and sharing all of the group discounts significantly reduced the cost and made the trip more affordable for everyone. A lot is to be said for traveling this way.

On the Epiphany, January 6, most of the group left LAX for San Jose, Costa Rica, where we spent one night at the Marriott. The next afternoon, the Aggressor van picked us up for the two+ hour ride to Puntarenas where we boarded the Okeanos. Shortly after we arrived, they left port for the ~36 hour crossing to Coco and served us dinner. The crossing was relatively smooth.

Okeanos Aggressor (the good, the bad and the ugly)

Note: The Okeanos will undergo a major refit next month so some of what I am about to report here will hopefully be moot in the future.

Okeanos is an old boat showing her age. The air conditioning was not working very well in the main cabin and lower decks. There were no thermostats in individual cabins. The cabins were musty smelling and diesel/gasoline smells were sometimes overpowering. Each cabin has a VCR, but IMHO additional storage would have been more useful. Any passengers over 5' 10" found the bunks and low ceilings to be a challenge. The three staterooms on the upper deck are cramped and uncomfortable due to the tendency of the Okeanos to roll in any kind of a swell. Located below decks, the remaining seven staterooms are slightly larger and more comfortable.

Diving was done from a RIB (nine divers) and a panga (eleven divers). Divers switched boats and dive sites each day. (I was told that they normally have two pangas but one was out of service). Gear is placed on the dive boats each morning and remains there between dives. Tanks are filled using whips to 3000 psi+ and topped up before each dive. Nitrox (32%) is available and highly recommended (it's a 36 hour boat ride to the nearest recompression chamber). Coco is not the place for inexperienced divers due to its location, currents and depths. As a result, the "rules" were fairly simple: "dive responsibly." Buddy diving is encouraged but not strictly enforced. We were asked to limit our dives to no more than 55 minutes or 500 psi, with a maximum depth of 120', and a three minute or more safety stop at the end of each dive. Alcoholic beverages terminate your diving for the day. The daily schedule was breakfast, first dive at 8:00 am, second dive at 11:00 am, lunch, third dive at 3:00 pm, night dive at 6:00 pm, followed by dinner. On the ten day trip we got in seven full days of diving and a maximum of 26 dives.

Beer and soft drinks were on tap. You must bring your own hard stuff. Deck towels and snacks were provided after each dive. Linens and towels in the staterooms were changed every two days. Meals were all buffet, tasty and generous.

The crew of seven was friendly and helpful.

Hopefully the scheduled refit will bring the Okeanos up to the standard that is expected on an Aggressor boat.

This was the second trip to Coco Island for my wife and me. The first time was in January of 1999. This year an El Nińo Southern Oscillation (ENSO) event is underway making the waters around Coco much warmer than usual. During "normal" years, the average surface water temperatures at Coco are 80/81 oF. This year the surface temps were 86/87 oF with a thermocline at ninety feet below which the water was 78 oF. These warm water conditions drive the hammerheads deeper. We did not observe any coral bleaching, encountered abundant fish life, but fewer hammerhead sharks than we did four years ago. Most of our group dove in either skins or 3mm wetsuits. 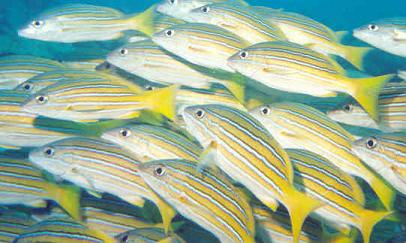 Piedra Sucia is also called Dirty Rock. We back-rolled off the panga into the water and began our slow descent down the side of the rock through large schools of creole fish. Below us at about 120 feet were a bunch of marbled rays. Above a white sand bottom in a rock canyon was a huge female marbled ray about five feet in diameter. She was slowly swimming in a large circle followed by twenty-two smaller males. The marbled rays swim by undulating the edges of their bodies in a slow, sensuous, effortless ripple. After observing the rays parade around and around for a while we began our multilevel ascent up the side of the rock to about 80'. We then swam out into the blue to a pinnacle whose top was at 70 feet. A school of big-eye jacks circled the top of the pinnacle. Tucked into crevases were giant hawkfish, huge lobsters, schools of big-eye soldier fish, pairs of blue and yellow trumpetfish, as well as leather bass out hunting. We returned to the main rock for the remainder of the dive remembering to occasionally look out into the blue in hope of seeing large pelagics. Alas, no whale sharks or mantas, but some of the divers spotted a mobula ray. 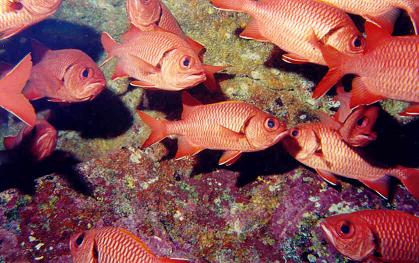 Just as it was getting dark we suited up for a night dive at Manuelita Shallows. Dropping into the water we noticed right away that things were very different from what they were during the day. Gone were the vast schools of ceole fish that swim in unpolarized schools over the reef during the day. They were all hiding in all of the nooks and crannies in the rocks, as well they should. White tip sharks that during the day were lying around like cord wood on the bottom were up and active. The white tips were swimming together in packs of thirty or more, moving up and down the edge of the reef in virtual rivers of sharks. We settled down on our knees on the sand with sharks swimming around, over and even under us. I reached out and felt their sides, rough like sand paper as they slipped by. What a rush! Occasionally a shark would dart into a hole, flexing and writhing to get at a hiding creole fish. The rest of the sharks would join in, swarming in circles about the rock in a seething mass of feeding frenzy. The white tips totally ignored the divers like we weren't there. After burning up all my film on the sharks, we moved away from the main show to see what else the reef had to offer at night. Obviously white tips don't eat lobsters; big ones were out walking around, totally unafraid of us or the sharks. Some jacks used our lights as hunting tools, flying over our shoulders to pick off small unsuspecting fish that we illuminated. Filefish, trumpet fish, zillions of soldier fish, and even one little silky shark were out and about. Too soon our time was up and we had to ascend to our safety stop in the dark. 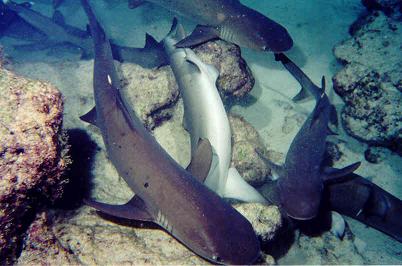 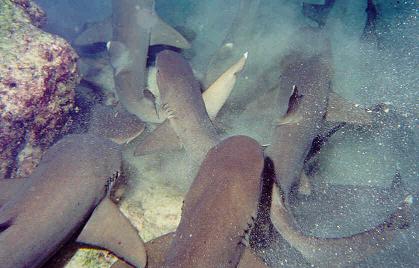 Alcyone is a seamount that arises from the deep about a mile offshore. This is why we came to Coco, to see the hammerheads. This is where schools of hammerhead sharks come to be cleaned by barberfish and king angelfish. We followed an anchored bouy line down to the bottom at 110 feet. In a sandy patch rested several white tips and a couple of marbled rays. We worked our way into a stiff current and pulled ourselves up a rock ridge at 90 feet. On our way to the rocks the biggest yellowfin tuna I have ever seen followed a few feet behind my wife. He was clearly over six feet long! Wow! We then spread out along the rocks and above a couple of canyons to wait for the big guys. They came! It's hard to fully explain how impressive and beautiful a seven-foot hammerhead shark is. The first thing you notice about them is how "buff" they look, pure muscle with a dorsal fin that sticks straight up. Their skin is a steely blue-gray that almost seems to glow. With slow sinuous undulations they appeared out of the blue first as gray shadows in the distance and then came closer and closer to the divers who held their breath so as not to spook them. The sharks would stop to be cleaned or sail near to or over the divers. Just as quickly as they appeared, they would disappear only to reappear a few minutes later in singles and new groups. I counted seventeen hammerheads at one time. While not as many as there were four years ago during an non-ENSO year, there were more than enough to thrill and satisfy this diver. In addition to the sharks, I had time to watch groups of leather bass gang up on cardinal fish hiding in the sea urchins. When our time was up we headed back to the anchor line for our ascent up to the safety stop. As often happens at Coco, we were treated to a fly-by of three wahoo and a silky shark at the end of the dive. World class! 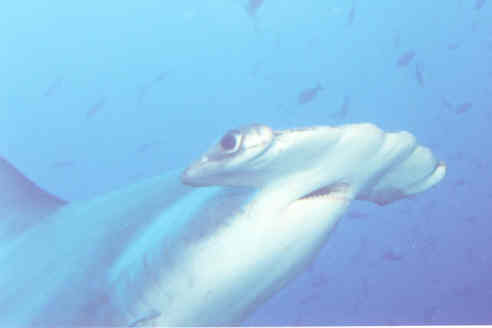 As Riff Raff in the Rocky Horror Picture Show said, "Don't dream it, be it!" Put Coco on your life list and go as soon as you can! Heck, sell your car and use the money to book a trip!